Sliding in just before the end of the month (dubbed Machi Koro May), we are reviewing our youngest daughter’s favorite strategy game. Last month, we did a review of Cat Sequence in honor of our oldest, cat-lovingest daughter’s birthday. Showing no favoritism (as parents do not have favorites) we’re covering Machi Koro for our other daughter’s birthday… despite how much it pains us to do so. You see, she absolutely loves Machi Koro while the rest of us hate playing it with her because she beats us nearly every time… and has routinely won against us since she was seven. 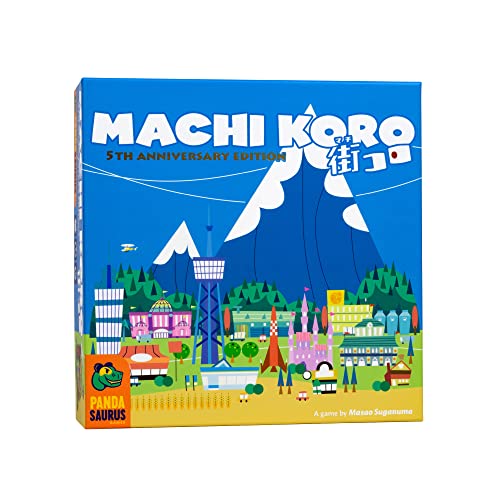 Machi Koro is a strategy card game with coins that has a bit of a Monopoly feel to it. As a newly appointed mayor, you must buy establishments to earn an increasing amount of money in order to build the landmarks your citizens demand. It’s easy to learn, yet presents a challenge each game due to the wide variety of strategies available to you and your opponents coupled with the luck of die rolls.

You wouldn’t think a seven-year-old could figure out the subtle (and sometimes diabolical) ways of building a city empire, but you would be wrong. A couple of years ago we played with another gaming family, warning them of her ability to dominate opponents, but they didn’t really take us seriously. That was until she beat everyone game after game… including all of the adults. She was eight years old.

Knowing that her birthday was coming, we all understood our obligation to fall victim to her city building skills once again. Machi Koro would be on the table soon after the cake was removed. The only question was which version? The original is great, and the 5th Anniversary Edition of the original is even better with plastic coins instead of cardboard, or would it be the expanded (and now out of print) version of Machi Koro: Bright Lights Big City.

We were all pulling for the classic version. She was given Bright Lights Big City last year, thanks to a very doting uncle and aunt, and our first playthrough became an epic two-day affair. The original Machi Koro already has plenty going on: lots of card stacks and grids on the table, coins scattered everywhere– and Bright Lights Big City has even more. It was honestly a little overwhelming, especially scattered across our kitchen table for two days. We were all grateful that she picked the original 5th Anniversary Edition to play this year.

Machi Koro is, like I said earlier, a city-building card game. Each player has four landmark cards to complete by paying off their construction costs. The first player to flip all four wins. In addition to edging a player closer to winning the game, each landmark grants special abilities such as re-rolling a die, rolling multiple dice, etc.

Players earn money by utilizing the stacks of Establishment cards that are available for purchase each turn. Numbered from 1-12, each Establishment card corresponds with a possible one or two dice roll each turn. All players start with just one die at their disposal, then have the opportunity to roll a pair of dice after flipping their least expensive landmark card.

I mentioned it was easy to learn, right. Roll the dice, earn money, and buy establishments that payout enough coin to flip your four landmark cards before anyone else.

Your individual strategy is where Machi Koro gets as fun and complicated as you like. Some players may not worry about buying early Establishment cards, going straight for a landmark card construction. Others might play the long game, amassing so many establishments that no turn seems to pass without everyone at the table handing over all the coin they have.

Whatever strategy you choose, heed this small bit of advice: take each player, no matter their age, as a serious threat, because once again, on her birthday, our youngest dominated us all at a game of Machi Koro. We’re probably going to regret buying her a copy of Machi Koro Legacy. 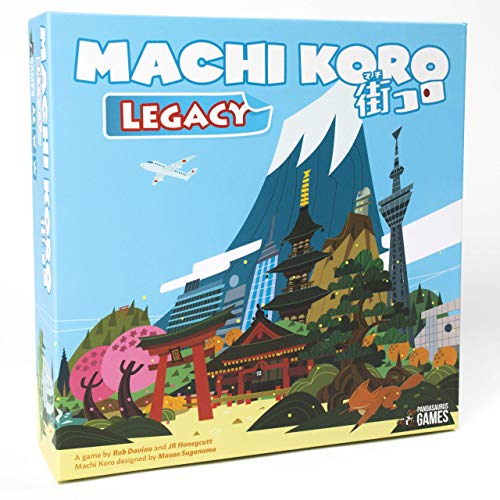